Many married couples facing divorce don’t have children. However, that doesn’t mean they don’t have something precious in their lives that they both love. Whether it’s a cat, a dog or some other exotic animal, companion animals can be very important factors in modern divorces.

Some couples even bring companion animals into their family in lieu of having children. The bond that they share with those animals can be very important and even part of their self identity. Thankfully, the state of California is now recognizing the importance of these animals to the people who live with them.

As of Jan. 1, 2019, the state of California is now taking a much more progressive stance on what happens with animals in a divorce.

Pets Used to Be Considered Possessions

The previous policy for handling companion animals in a divorce was far less enlightened than the modern law. California judges used to have to treat dogs, cats and other pets as simple possessions. They could not entertain the idea of shared custody. Instead, they would allocate the possession of the animal to one of the two people divorcing.This led to a lot of heartache and some contentious divorce battles over who would get to keep a beloved animal. Some people felt like they had to take drastic measures to retain a relationship with an animal they loved, such as offering spousal support in exchange for access to pets. Other couples tried going to mediation just for the sake of the animal. 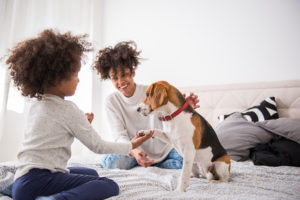 With this new pet custody law, couples can now feel confident that the courts will take a more reasonable approach to handling the animals that are part of the family.

Now that judges have the ability to view pets as something other than a possession, they can handle the process of allocating time with the animal differently. They should be focusing on what is best for the dog in question, just like they would for children in a child custody dispute.

In some cases, what is best for the animal might be regular visits with both of its former owners. What’s best could also include shared or split custody, with owners alternating weeks with the animal. In some cases, when one spouse travels extensively for work or simply doesn’t have a positive relationship with the animal, judges may still choose to allocate ownership of the animal to only one person.

Understanding the new laws about handling pets in divorce is critical if you hope to retain ownership of a beloved companion animal when you end your marriage. The better you understand the law and your rights under it, the better you can strategize for handling issues in your divorce.