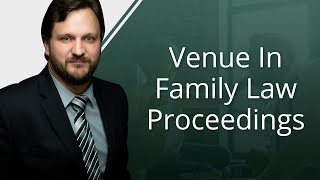 Hi, I’m Ben Vojtik, and I’m here to talk to you about venue in family law proceedings. In California, venue concerns itself with which county’s superior court is going to hear the matter going forward. Now the different types of family law proceedings have different standards for appropriate venue. For example, in dissolution of marriage cases or divorce cases, appropriate venue has a durational residency requirement. Now in those cases either the petitioner or respondent must be a resident of the state of California for six months before the petition is filed and of the county in which the petition is filed for the preceding three months.

Now jurisdiction is perfected by serving on the other party process. That’s the summons and petition. So whichever petition is first-served is the one in which the case will typically go forward. Now, the one exception is if that would not promote the ends of justice and in that consideration, the court will take into account the balance of hardships for the parties and witnesses. So for example, let’s say in a dissolution of marriage case in Ventura County one of the parties resides here with the minor children while the other party files for dissolution in say Humboldt County.

It is unlikely that that proceeding would go forward in Humboldt County because most of the evidence regarding the children’s well-being would be here in Ventura County. So in those cases the balance of hardships and the interest of justice would suggest that the case go forward here and that is a discretional decision that the courts would end up making. Then after the case has been going forward, it’s also possible to transfer venue. This typically happens when both parties move out of the county in which the proceedings have been going forward. Now, this doesn’t necessarily mean that the court will do so. It depends on what stage of the litigation this happens, but if neither of the parties is residing in the county in which the proceedings are going forward. It is likely that the county would then transfer venue to a county in which either of the parties resides. The court would again consider the balance of hardships and the interest of justice that would be promoted in that transfer.

So, my name is Ben Vojtik, and I hope this has been helpful. Thank you.