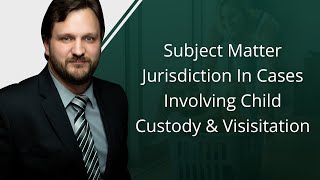 See the reason it applies here is because 49 of the 50 states, not including Massachusetts, have passed what’s called the Uniform Child Custody Jurisdiction and Enforcement Act or UCCJEA. This concerns which state has jurisdiction to make child custody and visitation orders. The first thing that it concerns itself with is which state is the home state of the minor child, which is which state has the minor child been residing in for six months as its permanent residency. Now there are obvious questions to that. Say you go somewhere on vacation and decide to stay over, at what point does that clock start ticking? Or if you are say in the military and are stationed somewhere not necessarily intending for that to be your permanent place of residence. These are all nuances that are discussed in various case law in California. If there is no state in which the minor child has been residing for a period of six months as its home state, there are a few other things that the court can consider for example parental ties to a state as well as whether there’s evidence in the state to be found regarding the child’s education, care, protection, and personal relationships. So if those are satisfied it is possible that that state finds that it has home state jurisdiction over the minor child, and it can make orders regarding child custody and visitation.

Now, I’ve personally been involved in hearings that were held simultaneously in two states, held over Zoom. It can involve four attorneys, two judges, bulk two parties, multiple witnesses in each venue. It can be a fairly complicated procedure but it is also very cool in all honesty. So I hope that I’ve been helpful, but you really should consult an attorney if you have subject matter jurisdiction questions involving which state should be hearing the child custody and visitation hearings.

So thank you very much and good luck.

A Letter From My Father