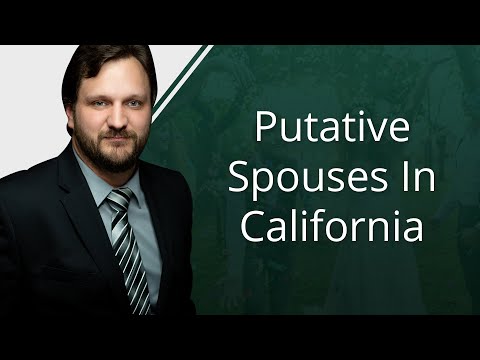 Did you get married and your friend forgot to take those online courses to become ordained
like they said they would? Or perhaps your spouse forgot about those Las Vegas nuptials that happened several years ago. If so, this is the video for you. I’m Ben Vojtik, and I’m here to talk to you about punitive spouses in California.

If a marriage is void or voidable and one or both parties had a good faith belief that the marriage was valid, then the court can decide to grant putative spouse status. Now, this is important because if a marriage is void, there is no community property. There’s no spousal support. The court’s ability to award attorneys fees and costs is limited especially if there aren’t any minor children.

Putative spouse status can change that. It allows the court to award spousal support and attorney fees and costs and it creates what’s called a quasi-marital property that the court treats as community property.

A marriage can be void for a number of reasons. It can be void because the parties failed to cooperate with the appropriate procedure for getting married, say the officiant wasn’t properly ordained, insufficient witnesses, or if the marriage license wasn’t properly filed with the county recorder’s office. The most common reason that marriages are void is that of a previous marriage. A previous marriage exists that wasn’t terminated.

Now it’s a little bit difficult to argue reasonable person standard for procedure because it’s pretty easy to do a Google search and find out how to get married. It’s a little bit different for a previous marriage because often that information isn’t as public or disclosed by the other spouse. So if any of this applies to you, I would recommend consulting with an attorney to figure out what your options are.

Thank you very much and I hope I’ve been helpful.